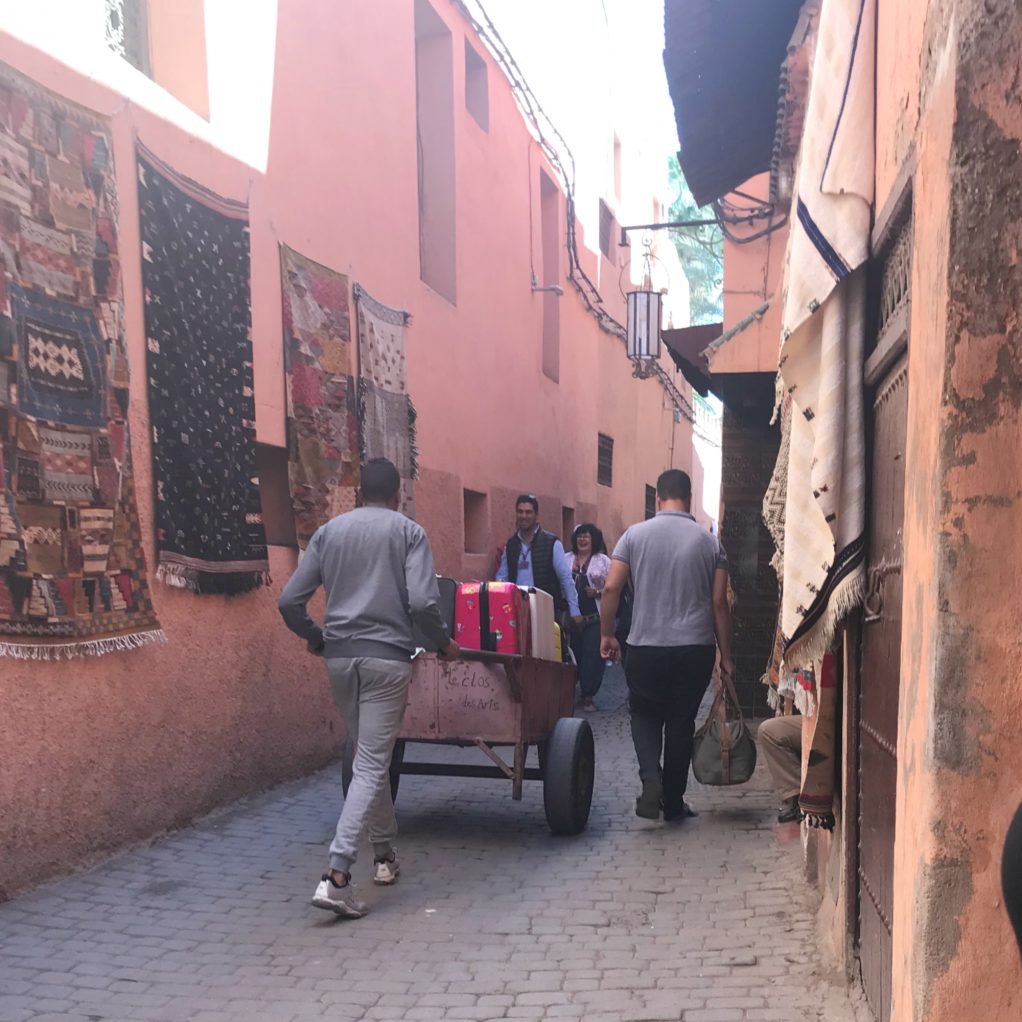 Last summer as we were getting out of the car to head to our town pool I had an email come into my inbox telling me that registration had just opened for my friend Michelle Fletcher’s first big workshop in Morocco. I have been friends with Michelle for many years now. Through art and business, our hearts have been tied together. She made some huge life changes within the past three years and I had been so inspired by her move to Africa that when this opened up I turned to Kelly and told him how much I would love to go. He said yes and I cried. I then immediately called my friend Alexis and asked her if she wanted to travel and make art again together and this time in Morocco. Well, who can say no to that? We have traveled and created together in France, Mexico, Scotland, England and we were about to add Africa!

This would be my first time in Africa and the first time in three years that I was taking a trip just for me. I was coming along as a student and a traveler. This is a rare and treasured gift and to do it with Alexis always makes everything more wonderful. 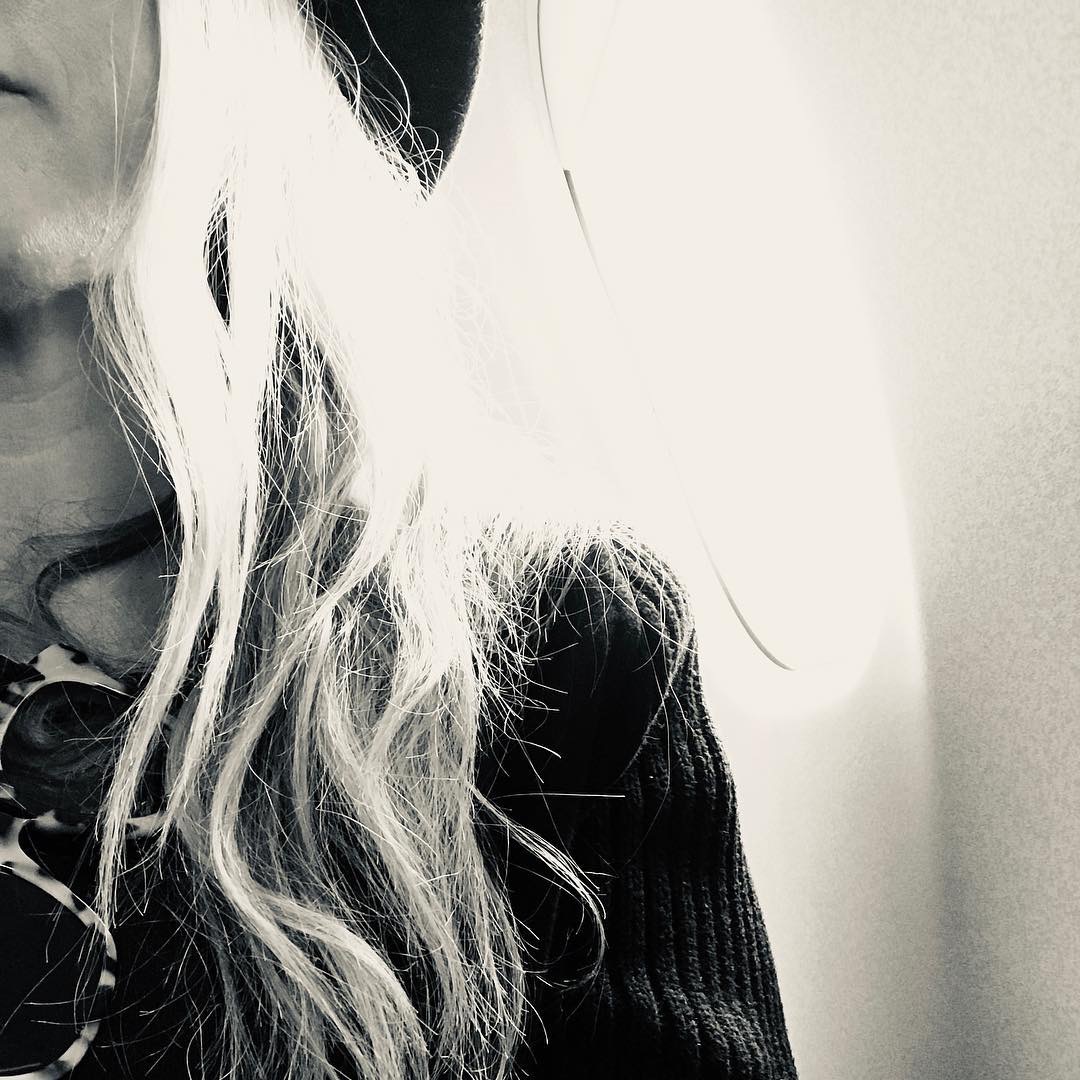 | Most people do not know that I hate flying. Hate it. But I do it anyway because just think of the adventures I would miss if I didn’t. |

After over stressing about what to wear, how to narrow down my art supplies and how I could bring back as many vintage rugs as possible it was time to leave. So, Alexis left from California and I left from Colorado and we would not see each other until Marrakech. 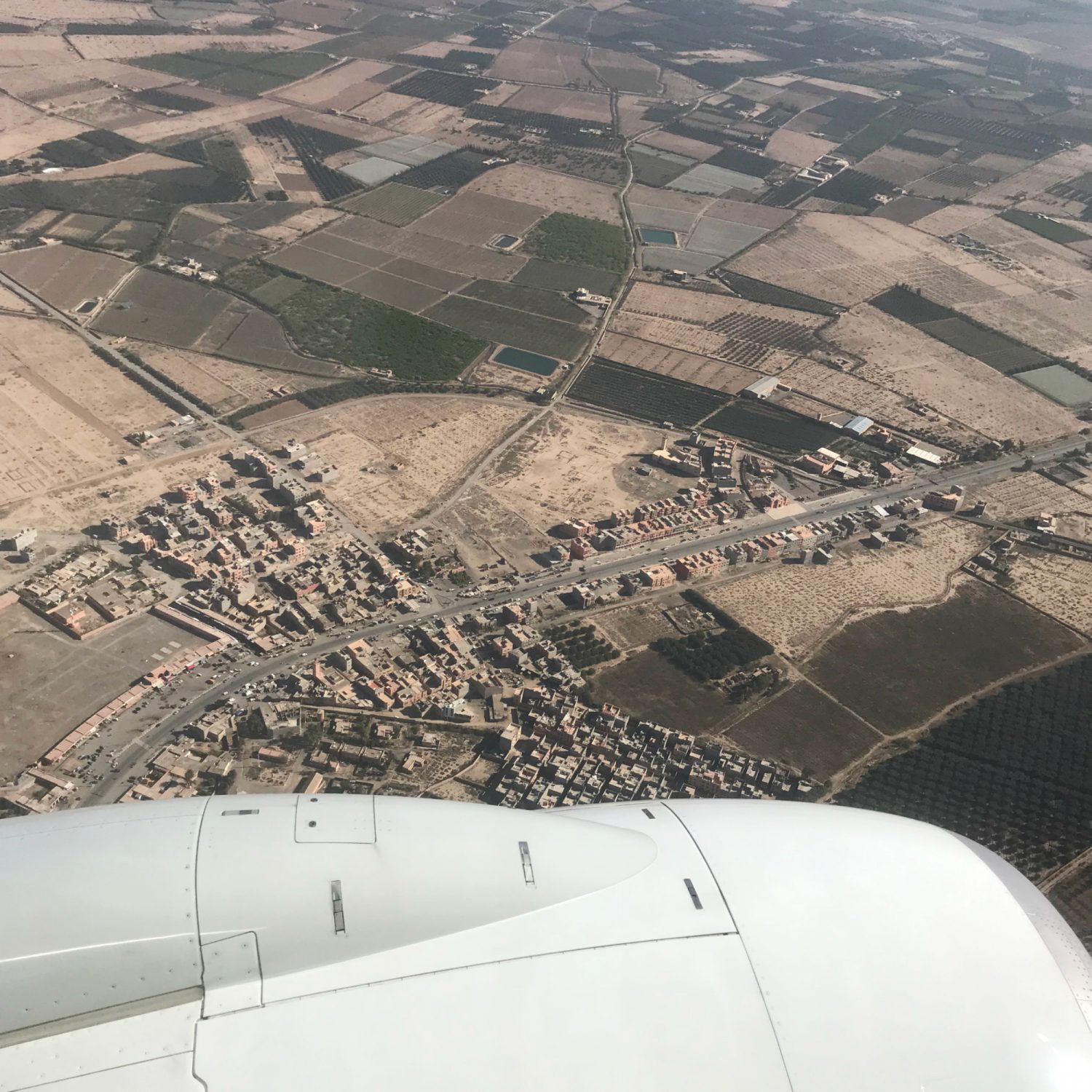 As I flew into Marrakech my head was not prepared for how different their beautiful world is from my beautiful world. The soil, the rooflines, the mountains, the pinks everywhere you look, the palms. Traveling from the airport to our riad everything was overwhelming, busy, scooters weaving in and out of traffic, music coming through the radio that I didn’t know or understand, the feeling of traveling way too long without a shower all over me, and being in the very real place of not knowing what to expect and what adventures were ahead of me. I knew this place was the most I had been away from what life looks like for me. The gap was already huge and I was open to it all. 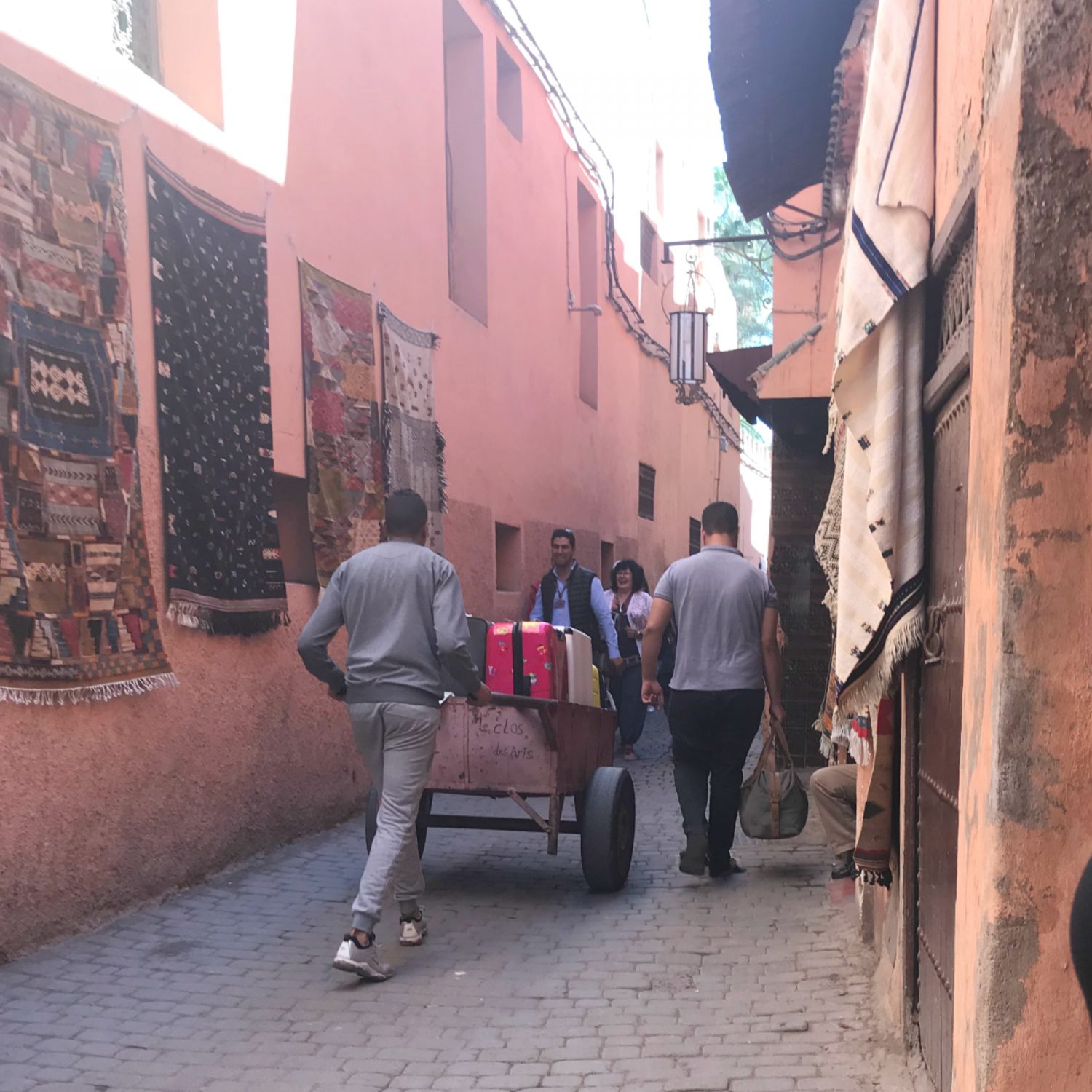 | I would like to point out that these are not just my bags:-)  I actually packed really light for this trip so I could bring home treasures. | 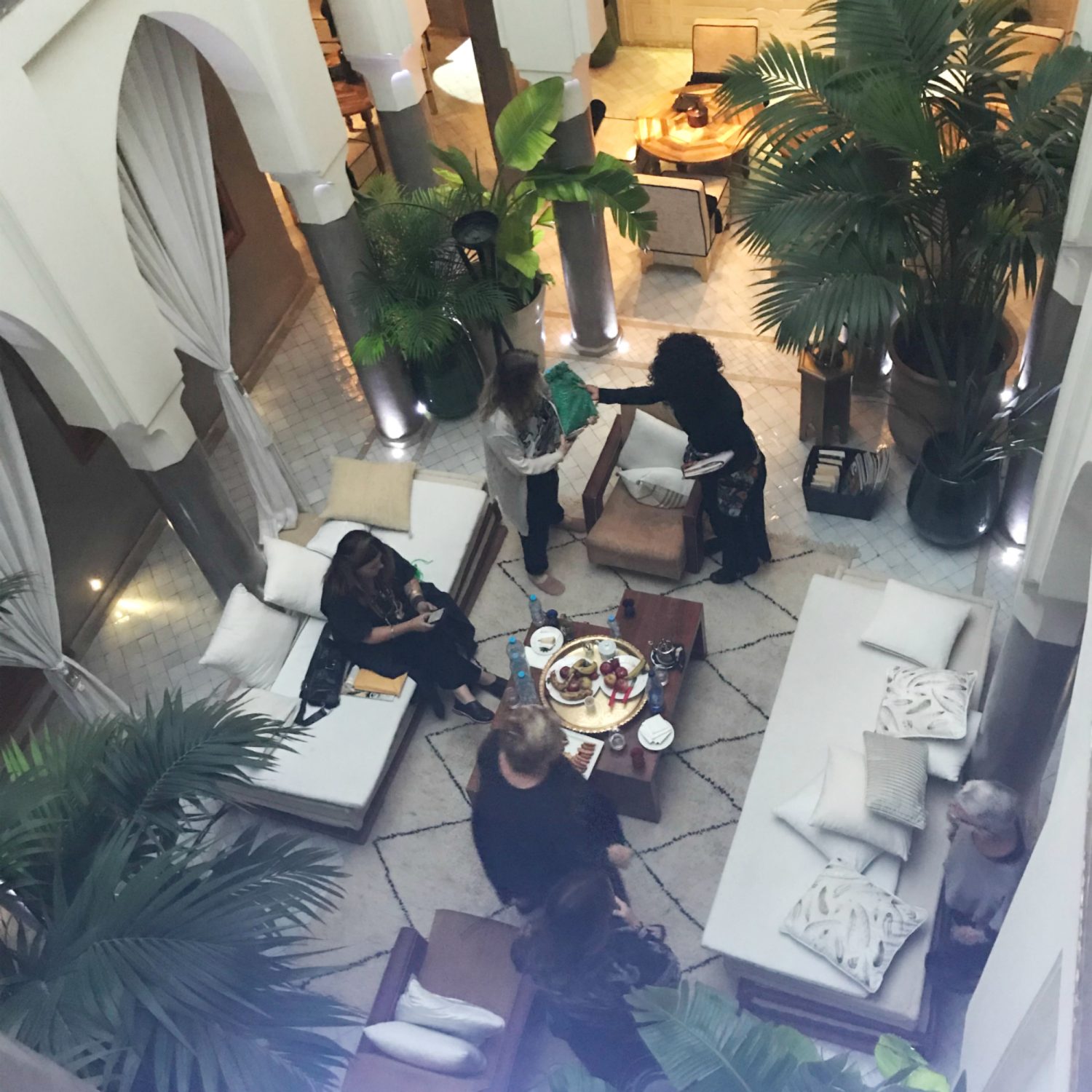 | The courtyard of our riad while we were in Marrakech. |

I was arriving half a day earlier than Alexis so I had signed up to go to a local hammam with four of the other women that had just arrived too. Westerners are no different than people in any other part of the world when it comes to what we are used to. We just don’t realize how limited our experiences are until we step out of it. When we had asked what to expect (or maybe that was only me and totally my personality) we were told that we could keep our bra and underwear on and that each service was private. Just getting there were a taxi ride, narrow alleyways and an unassuming doorway that led to the hammam. When we entered the dark spa the whole space had a soft red glow with every direction we were given so unfamiliar. We changed together and prepared for what we were told would be a bath with warm water and olive oil and then a massage. Warm water with olive oil and a massage after a long trip sounded divine. Well, what kind of good story would that make?

*Hammam-A Moroccan hammam consists of a bathhouse with multiple rooms (dry and steamed) for cleaning the body and soul according to traditional ritual performed by another person.

*Riad-a type of traditional Moroccan house or palace with an interior garden or courtyard.